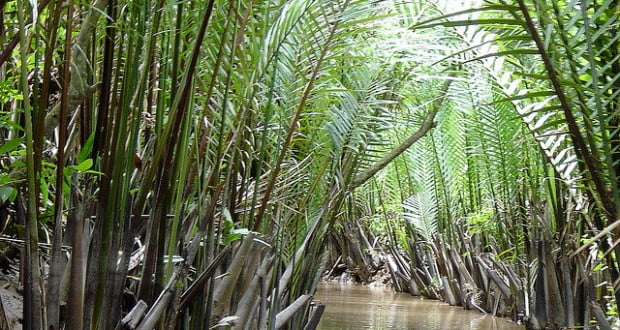 Getting Lost in Vietnam

Merry Christmas from Saigon! Helene and I just returned to Ho Chi Minh-City where we intend to spend the last leg of our trip. Vietnam thus far has been an exhilarating, fantastic adventure, and I’m glad we decided to come.

After spending two days in the crazy motorcycle hubbub of Ho Chi Minh-City, we decided to go get ‘lost’ in a small town of the Mekong Delta, by getting as far away from the city as we could on a day trip. We finally ended up in Ben Tre, a small town on the Mekong River, after two hours in a packed local bus, 40 mins of cyclo (a big bicycle with a chair in the front), a 40-minute ferry crossing of the Mekong, and finally a 10 minutes walk to a guesthouse in the middle of a longan orchard. Yep! We’re far enough!

Aboard the ferry, Helene and I met Mr. Ngoc, a kind old gentleman who left for Atlanta, USA after the Reunification, but who returns to his hometown of Ben Tre every once and again. He seemed delighted to be able to speak French with us, as he hadn’t spoken the language in a long time, having obviously learned it under the French occupation. We ended up visiting his house, where we met his wife, uncle and aunt, and where he regaled us with fresh coconuts and tales of Saigon under American administration. Mr. Ngoc was a deputy in Saigon, and was emprisoned 12 years in Hanoi following the Reunification. In a quaint illustration of Vietnam during the American War, his uncle was fighting on the side of the Communists, and told us how Ben Tre was bombed 24/7 after the Viet-Congs took it back during the Tet Offensive.

After dark, Mr. Ngoc, in a kind gesture, insisted that Helene and I be driven back to our guesthouse by motorcycle, which led to a drive in pitch darkness through sinuous paths in a coconut orchard. Helene had sworn never to get on the back of an ‘Honda om’, but Mr. Ngoc just wouldn’t take no as an answer.

Upon arriving at the guesthouse, I was confronted myself with people not taking no for an answer. The manager of the guesthouse, Phat, insisted that we join his table for a taste of a local delicacy: black king cobra, cooked in a curry sauce, and eaten with bread. I also had to partake of two or three shooters of black king cobra blood, mixed with Vietnamese rice wine. Pretty delicious, all things considered. In return, I offered them a bottle of Mao Tai, a very famous Chinese rice wine, which they seemed to like well enough. And that is how we spent our Christmas Eve!

On Sunday, Helene and I took things easy, but for Monday the 26th, we decided to set out on the Mekong for a little boat adventure. Phat had initially offered to guide us through the short tour, but he had to attend a wedding that day, so he arranged for a boatee to take us around. The man was very kind, and bent over backwards trying to make sure we were having a great time. And a great time we had indeed! We navigated through small, gorgeous canals in his small motorboat, and visited a small coconut candy factory as well as a honey orchard, where we ate fresh banana, dragon-fruit, longan, pineapple, and one or two other fruits which I unfortunately forget.

After the fruit feast, we sat down in a small rowboat, and rode around the canals some more. (I am terribly unstable in small boats, so all I could do was sit in the bottom and wait for us to arrive.) We headed out to Phoenix Island, where we were treated to a surreal visit of the remnants of the compound of the “Coconut Monk”, a holy man who tried to unify Christianity, Buddhism and Cao Dai. The guide, a young man in his early twenties, was making such a huge effort to please us and explain the genius of the Coconut Monk, that I couldn’t help but be touched by this little island. He showed us the animals under his care, which included a few primates, a porcupine, two ostriches, a deer, and a weasel. (He had a peacock, but unfortunately, it had died recently.) He was delighted at our acceptance to show him some English, and I left the island happy at this part of the trip.

Our guide then took us to Turtle Island to watch the sunset over the Mekong Delta from a rickety pier, then he drove the boat to the shore where he captured some fireflies for our enjoyment. We returned to the guesthouse following small canals in total darkness, as the sounds of crickets rose from the banks.

There’s a lot more to tell, but I’ll do so when I have some pictures to go along. One last thing for now:

On our way back from Ben Tre, the manager of the guesthouse convinced us to take a minibus back into town, and it was a bad mistake. The minibus ended up costing a lot more than the initial price because the driver insisted on charging us for the extra space our backpacks were taking. Then, he stopped 20 minutes short of our destination, in a hangar, and told us to take a motorcycle to get to our next guesthouse. Needless to say, Helene and I were quite pissed off, and ended up paying extra for a taxi ride, after rudely pushing back the crowd of motorcycle drivers who were crowding us badly. The error we made was to pay early during the trip, and not at the end of it; we were most likely lucky he didn’t drop us off in the middle of nowhere.

So lesson learned: when traveling in Vietnam, take a boat ride down the Mekong, and screw the damn minibuses.