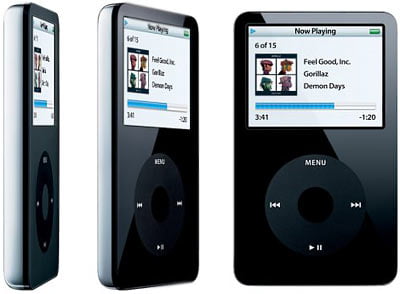 Wednesday night, the E3 Core Team gathered at Ubisoft’s favorite Shanghainese restaurant, 海上阿叔 (“Shanghai Uncle”), for one final cheer over our accomplishment. We had an awesome time, and much wine was drunk as we cheered on.

In the middle of the meal, Julian, our Marketing Game Manager, announced that the team had elected a “MVP” by unanimous agreement… and that this MVP was me. I was stunned, but not as much as when they took out a gift for me. You see, the team, to thank me for my work, bought me a frickin’ 30GB iPod Video.

I was speechless. It would have been a very nice gift if Ubisoft had offered it to me, but this was a gift that my team bought for me. I can hardly believe it. Wow.

So this morning, I’m going to the cafeteria with my iPod playing some Jan Jelinek, when one 阿姨 (“ayi”) calls me over. She had promised to give me some sticky rice with beef for breakfast this morning, and she was determined to keep her promise. So I waited idly as she microwaved some sticky rice for me, and went to my desk to eat it.

Eating sticky rice, while listening to my iPod. Enjoying two gifts at the same time, one great, and one small. That’s a hell of a good way to start a morning.