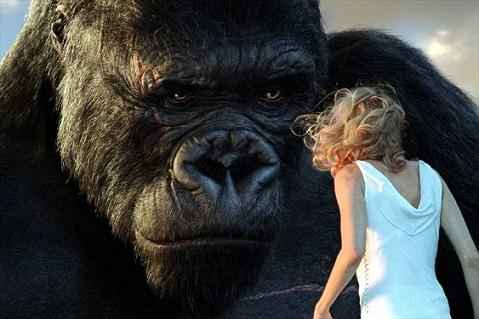 King Kong and the Movie Industry

Saturday night, Helene, a few of my colleagues and myself went to see Peter Jackson’s King Kong at the ever-pleasant and weirdly-named Paradise Warner Cinema City. As I described it in a July 2005 post, this theater boasts “VIP tickets” where you get to sit in a room of 30 with reclining leather seats; not only that, but popcorn and a soft drink are included in the admission price. Good thing these leather seats are the epitome of comfort, given that King Kong is over 3 hours long!

Overall, I found the movie a pleasant experience. It might have been because so many people cautioned me about the movie being too drawn out and emotionally empty, but I thought the pacing was good, and didn’t mind the overflowing of action scenes.

But then it got me thinking… You know, it’s kinda weird that a movie of King Kong‘s magnitude, the current title-holder for most expensive movie production in history, pleases me mildly, and will most likely be forgotten when the next blockbuster comes around. How is it that I get more emotional impact out of an episode of Scrubs, or remember more vividly scenes from, say, Arrested Development?

I guess part of it is that television got insanely better in the last years (thank you, HBO!) With solid writing, a television series has a lot more space to build interesting characters than cinema. What ultimately draws me to any story is seeing characters react to situations, or creating them. Conflict is interesting when it arises from different goals or principles in characters. That’s why I was so drawn to Sideways, for instance.

Part of it might also be that I’m growing older. I’m pretty sure I would not have taken to The Royal Tenenbaums as a kid, say. That’s probably a big part of it. But watching older movies, including Hollywood blockbusters, it feels to me as if character development is slowly taking a backseat.

Take Raiders of the Lost Ark, for instance. The movie goes to great pains to establish an interesting anti-hero in Indiana Jones: he’s very daring and skillful, but we also know him to be a shy professor living a double life, and a guy who gets scared for his life whenever he’s put in a dangerous situation. He’s also not above tricking his way out of a problem, for instance, by shooting down a guy with a sword. When the movie kicks into high gear, we are not only seeing a series of interesting action shots: we’re following Indiana Jones, enjoying his skills, and laughing at just how scared shitless he is all the time.

Somewhere along the line, Hollywood seems to have forgotten that contradictions and weaknesses is what makes a hero interesting. Surprisingly, it’s not lost on television series, who go to great pains to depict flawed characters.

In the 1976 version, the female character (Dwan) was also affected by the greed that ultimately brings down King Kong. She is soon torn between her desire for money and the empathy she feels for King Kong. At the end, she decides what is being done to Kong is wrong, but it is too late. The tragedy of the movie comes from the fact she made the right choice at the wrong time.

In Peter Jackson’s version, there is none of that conflict. Naomi Watts’ Ann is, quite simply, a goody-two-shoe: despite being terribly poor, she will not do a nudie show. She steals to live, but hey, it’s an apple, people. And when King Kong is captured, she doesn’t even feel rage at being manipulated by greedy people: she cries like a baby at seeing this innocent creature captured, even though it killed half of the boat’s crew for no reason earlier.

Again, it might just be me. But King Kong feels to me like the continuation of a trend, where script and character development are left behind in favor for action-packed set pieces. If it’s what the market demands, that’s fine; I’m just glad I’ve got The Sopranos, Scrubs, and Arrested Development to satiate my character-driven story needs.

P.S.: Yes, I’m aware that Peter Jackson is from New Zealand, but he is still part, if not the epitome, of Hollywood’s flavor of big-budget cinema.