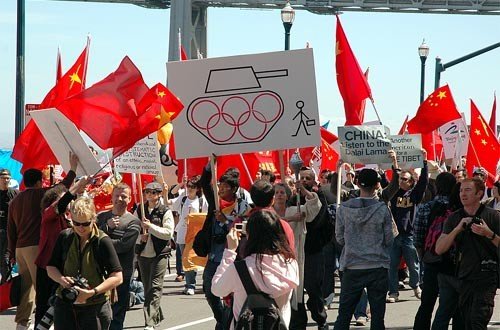 Let me make one thing very clear off the start: yes, China has issues with human rights, and its treatment of Tibet and Xinjiang independentists is an important issue.

That being said, I have a major problem with the way the West is dealing with the Olympics being held in China right now. The protests along the olympic flame’s paths were pretty embarrassing, but the slew of smug reporters talking about China, not to mention the misspelled Powerpoint presentations I’m getting by email, are making me facepalm vigorously.

I’ve taken part in protests in the past, so I’m not condemning this mode of citizen expression at all. I stood in the streets of Montreal in -30 weather when I felt I should send a clear signal to my Government that it shouldn’t participate in the unlawful invasion of Iraq. I did so because standing in the streets by the thousands is an effective way of talking to your elected Government. It is stronger than a vote, in a way, because it requires initiative and active participation on your part.

But what are the objectives of protesting against the Beijing Olympics? Specifically, why do some journalists and tourists go to Beijing, then protest and get kicked out by the PRC? Do these people believe one second that doing so is going to change the way things are run in China?

The worst part is, it aggravates things. The young Chinese have an unparalleled access to Western media and information nowadays. Of all the people I’ve met in my age group, none ever suggested things were perfect in China. Some may argue that the theory of communism is very sound, but none would deny the state of affairs in the country.

And these are the people who can make a difference. This is the first generation of Chinese who are seeing the world open up before them once again. They are informed and critical, and they listen to what the West is saying about them. And you know how they react to seeing sensationalist attacks on China throughout the Olympics?

They see it as an attempt by the West to make them lose face. It’s all the more problematic that these reactions are not posted in plain English for us Westerners to see; they happen on Chinese forums, and are written in Simplified Chinese. In their eyes, the protests are not a rallying call, they’re a humiliation of their nation in a critical moment of openness to the world.

Is that worth having the smug feeling that comes from acting like an ass on Tienanmen Square before getting expelled?

The problem with China requires much more complex means to resolve. It demands that we open up a dialog with the people of China, so that we can present them with our values, in the hopes that this might leave a mark. This approach demands that we also listen lest the dialog turns to a sermon: and the danger in listening is that you, too, might change your mind.

And to me, that demands a lot more courage, conviction and will to change things than wearing a Free Tibet t-shirt.

Previous: Weird stuff I’ve eaten
Next: What’s the Opposite of Homesick?