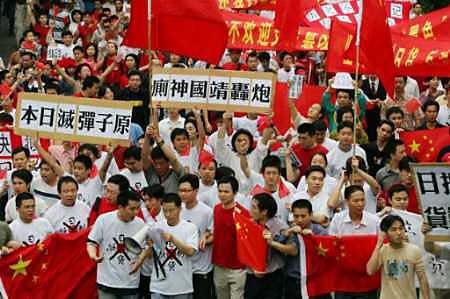 I apologize in advance to Chinese friends and acquaintances who might be reading this blog, but I want to get this off my chest.

Saturday, universities in a number of Chinese cities held massive anti-Japanese rallies. In Shanghai, 20,000 people took the streets to voice a series of complaints against Japan. Chief among them is the release of a new Japanese history textbook that whitewashes some of the horrors of Japanese occupation during World War Two. Other reasons include recent talks of including Japan in the UN Security Council, and a dispute about drilling rights in the South China Sea.

Despite being China’s most cosmopolitan city, the protests in Shanghai were massive and rather ugly. The protesters broke many windows of local Japanese bars and restaurants, despite the fact that the owners and the staff are usually all Chinese; a Mazda car was overturned; the crowd attacked a police car after a rumor that the man inside was Japanese; and two Japanese students were attacked. The crowd threw rocks at the windows of the Japanese consulate, and the crowd sang such edifying slogans as ‘Die Japanese pigs’.

If it were just the acts of a minority, it would be less unsettling, but from the people to whom Helene and I speak, anti-Japanese sentiments appear to be widespread. Those who didn’t participate in the protests seem to nevertheless share the rage expressed by the protesters. In some cases, otherwise kind and well-educated Chinese people expressed their regret to have missed the protests because they would have liked to also smash windows and chant slogans.

To be perfectly frank, I am disappointed in my host country right now. I’m surprised that otherwise perfectly sensible and reasonable people are so blindly venting their rage at the Japanese. I realize anti-Japanese sentiments run deep in China, especially over the events of World War Two. However, it does China wrong when people behave so badly in a public protest.

To those who are still enraged over Japan, please take a minute to calm down, and search the web with an open mind. Read about the current issues between China and Japan, and think. You might come to realize the current attitude against the Japanese only causes harm to China’s international image.