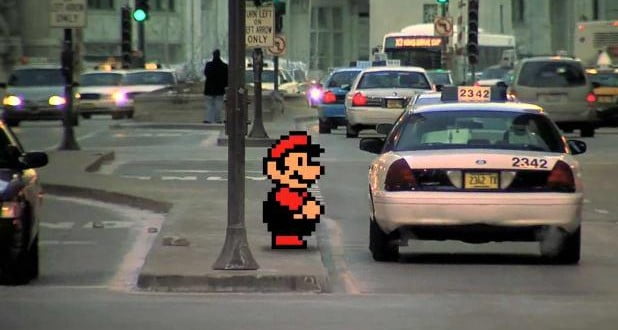 For a newcomer to Shanghai, the city’s maze-like layout can be quite distressing when compared to a North American city’s grid-like order. It’s easy-and downright fun!-to get lost in he side-streets of Shanghai, and many cool discoveries can be made.

When you stumble upon a hidden gem in a side-street of the city, it’s easy to feel like you’ve taken a warp pipe out of Super Mario Bros and stumbled upon a bonus level. That’s what I’ve began calling these little secrets of the city: bonus levels. Here are some bonus levels my colleagues or I have discovered over time:

The DVD Bonus Level
Back when the studio was in Pudong, one could walk to an area under heavy construction two blocks away from the office. To get to it, you had to exit the building from the back, climb an overpass, walk over a barren field filled with construction material, to finally get to a huge area filled with pirated DVD stores and game stores. The selection was amazing, despite being totally out of the way and impossible to stumble upon. Unfortunately, the entire block was razed to make way for the new tunnel under the river.

The Plunger Bonus Level
How’s that for a Mario Bros reference? A colleague of mine, looking for a plunger to fix his toilet, asked a small store clerk where he could get one. He was redirected to a street address. The address looked like a normal residential building, but when he opened the door, it led to a small courtyard where dozens of merchants sold houseware… including incredibly cheap plungers!

The DVD Bonus Level II
5 minutes away from work, there used to be a DVD store carrying an awesome selection of DVDs, including many hard-to-find TV series. The place was disguised as a tea shop, so that you had to walk into a café to get to the DVDs. Said DVD shop has now moved right next to my home, and no longer hides its identity.

The Stinky Tofu Bonus Level
Right next to the very business-like old office in Pudong was a side-street, hidden by a residential gate, where you could get street food like cho tofu for very cheap prices. Helene found it one day, and I’ve seen a lot of locals carrying street food seemingly coming from this place, but I haven’t been able to find it on my own.

The Massage Bonus Level
A colleague of mine claims to have found a massage and baths place, very clean and professional, indicated only in Chinese. He says the prices are incredibly cheap, and he regularly goes there for 5-hour massage binges followed by ginseng baths and other such luxuries. He is keeping the address to himself, not wanting expatriates to flood the place.

The Underground Art Bonus Level
Dongdaming Lu, north of Pudong, is a seemingly innocuous street like all others in Shanghai. But go through a gate, and enter the disaffected warehouse at the back, and you’ll find yourself at DDM Warehouse, an underground art space featuring modern art pieces by Chinese artists, and occasionally showing banned movies about such controversial topics as gender roles, homosexuality, and greed in Chinese society.

The Restaurant Supply Bonus Level
After looking for 2 weeks for martini glasses, I went up and asked the owner of a French bistrot where he bought his own glassware. He directed me to a place, called Hotel Equipment Depot, where all restaurants go to buy their equipment. It’s the kind of place you cannot simply stumble upon; it’s hidden in the back of an alley, you need to go up the stairs in what looks like a disaffected building, and guards look at you crossly as you walk in. The place is filled with bar and restaurant equipment, at a fraction of the price of places like IKEA. Heaven!!