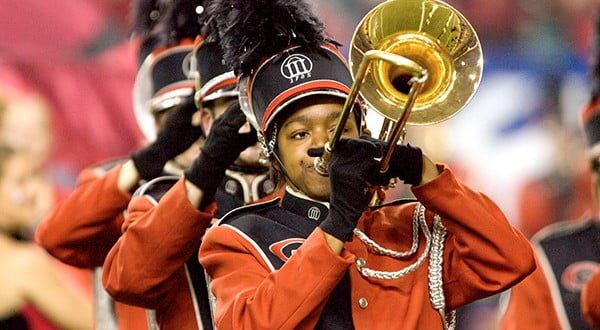 When I try to explain why I like the weirdness of Shanghai, it’s difficult to give a specific example. It’s not so much that you get used to small, precise cases of weirdness; rather, you get used to different weird things happening to you all the time. Here’s one such event.

Sunday afternoon, our 阿姨 (“A Yi“, cleaning lady) gave us a call, saying she had a pair of tickets for an event at the Shanghai Stadium in the evening. We were unclear what kind of event she meant exactly, since this conversation was entirely in Mandarin. Still, we understood it was music, and it was something from America. “I won’t go because I wouldn’t understand the words,” said our 阿姨.

It was free tickets, it was for an American event, and it was in a stadium, so it sounded good enough to check out. “Besides,” insisted 阿姨 when she came around to give us the tickets, “if you don’t like it, you can always leave.” So we made our way to the Shanghai Stadium, as I was mentally listing what rock bands could be in Shanghai at the moment.

When we got to the stadium, we saw that the center of the stadium was still set up as a tracking field… A sports events, then? We sat down, intrigued. And that’s when we finally understood what it was.

It was a marching band show. Not a competition… An actual show, but the University of Georgia Marching Band, who had won some sort of international marching band competition, and got to show off their talent to a stadium full of Chinese people, some family… and two very amused Canadians who spent the next 45 minutes having American Pie flashbacks.

Was it good? It was definitely surreal. And as you quickly learn in Shanghai, weird is good.