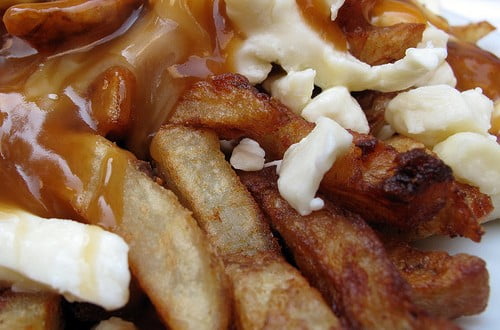 Mike considered me with a mixture of puzzlement and mistrust. I explained again.

“You’ve got fries and gravy on the menu, right? And then right below, there’s fries and cheese.”

Mike scanned the Moon River Diner, making sure all his customers were accounted for. The June evening was hot in Shanghai, so expats and Shanghainese stayed home for the most part. We had Mike’s undivided attention.

“You put the cheese on the fries first. Then put the gravy on top to melt the cheese. That’s poutine.”

“Sounds gross, but it’s your stomach” said Mike, heading to the kitchen. My fellow Québécois expatriates grinned. Oh, it was gonna be gross alright. We would accept nothing less.

It’s fat. It’s unhealthy. A single serving can account for more than a thousand calories. It evokes sheer culinary terror in the French. Heck, even the Americans find it disgusting.

No wonder the Québécois are so proud of it.

In a society that guilts us into health, eating poutine becomes a transgressive act. You toss aside the guilt, and commit culinary blasphemy. You joke about heart attacks and waistlines, and dig in before the fries get soggy.

This guilt-fueled poutine love affair mirrors in many ways Québec’s relationship  to its French dialect, joual. The language of the working class, joual suffers derision from the linguistic elite, who portray it as rough, uneducated and contaminated by the English language.

Yet if you’re Québécois, joual is the way you talk to your closest friends. It’s how you curse when you flatten your thumb with a hammer. It’s how you tell someone you love them and mean it.

Poutine is to gastronomy what joual is to language: it may not be delicate nor elegant, but it’s who we are, and we’re proud of it.

Poutine consists of three essential ingredients: fries, gravy and cheese curds. Of these, the cheese curds are the most distinctive to Québec, and explain why the dish was invented here.

The cheese used in poutine consists of fresh cheddar, invented in the Bois-Francs region of the province of Québec some time before 1960. Looking to save excess production, dairy farmers invented the cheese curd, a simple and fast recipe that caught like wildfire.

The cheese curd is best-known for the “squeek-squeek” sound it makes when eaten fresh. The curds, small pieces of cheese, are coated in a thin, fresh milk, and rub against the teeth to produce the sound. In French, they’re known as crottes de fromage: literally, cheese droppings.

Cheese curds are at once simple and delightful. In the villages where they are the most famous, you can find cheese curd bags on the counters of convenience stores, next to the chewing gum. They’re made fresh daily, and are meant to be kept at room temperature and eaten on the same day. Later than that, and the squeeks go away.

When Cheese and Fries Collide

The combination of frite sauce (fries with gravy) and cheese curds was unavoidable. By the mid-fifties, most casse-croûtes (greasy spoons) sold the popular frite sauce alongside bags of fresh cheese curds. It was a matter of time before someone put two and two together.

Regardless of who claims to have invented the poutine, the creation myth is nearly always the same:

Some time between 1957 and 1964, a stranger walked into the inventor’s casse-croûte. The stranger ordered a frite sauce, then asked the owner to add a bag of cheese curds to the mix. The inventor was at first puzzled by the idea, but the dish became a staple of the region, soon spreading across the province.

The name “poutine” is a joual term borrowed from Acadian French, and possibly related to the English word “pudding”. Before it became associated with the famous dish, it designated any unappetizing mixture of mismatched food ingredients, a description which many find fitting to this day.

In Warwick, it was Fernand Lachance, owner of casse-croûte L’Idéal who claimed to have invented the dish. His restaurant, later renamed Le lutin qui rit, has unfortunately closed down. The Kingsey Falls cheesemakers whose curds he employed have been moved to Warwick after being bought out by Québec cheese giant Saputo, ruining the small-scale, local flair of the original.

Jean-Paul Roy from Drummondville made the other credible claim to the invention of poutine. Roy’s restaurant, Le Roy Jucep, still stands in its original spot along Drummondville’s main road.

Le Roy Jucep serves poutine with their original gravy, which actually adds credibility to their claim. The “sauce Jucep” is blander, sweeter and thicker than its contemporary counterparts, an unsatisfying proposition to many poutine connoisseurs. If Le Roy Jucep has indeed invented poutine, then theirs might be the “proto-poutine”: the original recipe that others soon improved upon to evolve it to today’s standard. This means that the poutine at Le Roy Jucep has historical interest, but very little culinary appeal.

Further down Drummondville’s Boulevard Saint-Joseph and up Route 122, you will find Fromagerie Lemaire, a cheese factory whose daily fresh cheese curds are sold everywhere in the surrounding townships. Eating their poutine layered with super-fresh curds that sing between your teeth, it’s easy to understand why poutine spread so fast.

Since the rise of the dish’s popularity in the sixties, the term “poutine” has grown to include a bewildering array of fast food dishes, all messier and fatter than the next.

Any dish that incorporates the three basic ingredients of cheese, gravy and fries, or close variants, can be called poutine. You can make a poutine with other cheeses, such as blue cheese or goat cheese. Use spaghetti meat sauce instead of gravy and you get poutine italienne. Change the fries for breakfast potatoes, and you’ll get poutine patates rissolées, a late-night favorite at Chez Claudette in Montreal.

Add green peas and shredded chicken, and you get galvaude. Add cole slaw to a galvaude, and it becomes poutine gaspésienne, my favorite non-classic poutine.

Then there’s the Chinese poutine.

Mike had humored us when we asked for poutine, but by the look on his face, my friend Hugues was now pushing his luck. Hugues was describing poutine chinoise, or Chinese poutine.

“You put the cheese on the fries. On the left side, you pour regular gravy, on the right, spaghetti sauce.”

“So poutine chinoise is half Québec poutine, half Italian,” Mike asked, skeptical.

As Hugues dug into his poutine chinoise, it dawned on us that we were most certainly witnessing the first Chinese poutine eaten in China.

Poutine has spread far and wide beyond the region that gave it birth. It took over Canada, and you can now find it all the way to Vancouver and Edmonton. Fast food giants McDonald’s and Burger King also incorporated them in their menus across the country with great success. Poutine is quickly transcending its Québec origins to become the epitome of Canada’s middle class gastronomy.

Québécois are bringing the dish with them across the ocean, and although its quality falls the farther apart from the cheese curd factories of Drummondville and Warwick, poutine is still sought after by Québécois everywhere when they are homesick and hungry.

Poutine might not be fancy or delicate, but it’s hearthy and joyful. It demands that you celebrate its flaws to appreciate its strengths. It speaks of simpler times, uncomplicated by food fads and calorie counts, where all you needed was something to pad your stomach on cold days.

In all the ways that matter, to appreciate poutine’s joyful excess is to understand Québec itself. 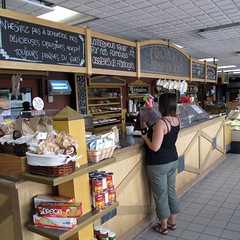 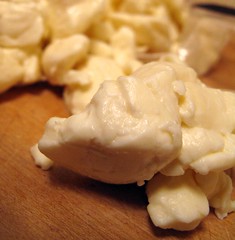 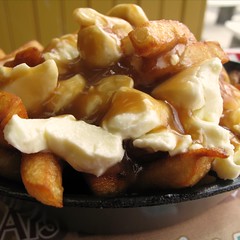 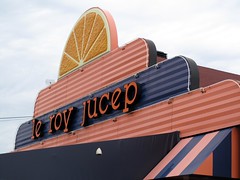 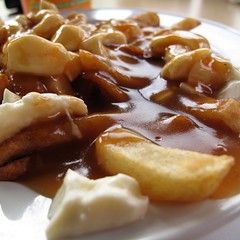 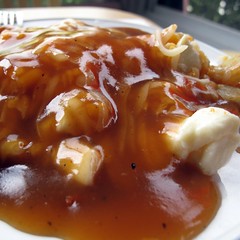 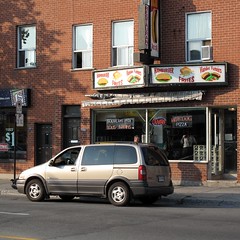 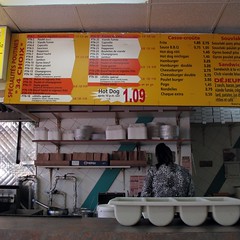 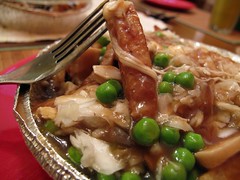 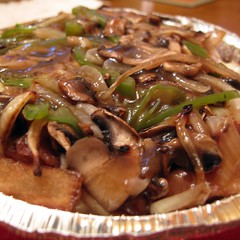 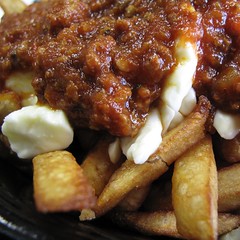 If you want to experience a truly authentic casse-croûte off the beaten path, check out Jojo Pizzaria and its impressive selection of thirty-four poutines, at 6507 Papineau. If you’re in an adventurous mood, check out Chez Claudette at 351 avenue Laurier Est, where you can have a burger with fried egg and a breakfast potato poutine in the morning. Not for the faint of heart.

Au pied de cochon and its decadent, marvelous poutine au foie gras can be found at 536 rue Duluth Est. Au pied de cochon is well worth a visit for the rest of its menu as well, marrying a love of Québec traditional food with haute cuisine sensibilities and a stunning amount of foie gras.

You can experience Le Roy Jucep‘s original poutine at 1050 boul. Saint-Joseph in Drummondville. Drummondville is located an hour away from Montreal, along Highway 20 heading east. A little further away is the amazing Fromagerie Lemaire, at 2095 Route 122 in Saint-Cyrille-de-Wendover. Make sure to get there at noon to experience their cheese curds at the exact moment they come out of the kitchens.

A big thank you to my friend Hugo, who drove us to Drummondville on a sunny Thursday morning so I could eat way too much poutine in his fine company. Thanks also to Hélène, who pointed me in the direction of Fromagerie Lemaire for the best cheese curds I’ve ever had.

Previous: The Bagels of Mile End
Next: Postcard from the Edge 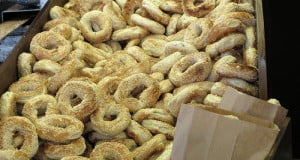 The Bagels of Mile End