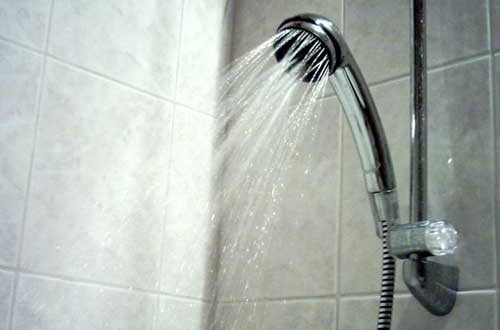 I mentioned in the past that our apartment building has the most retarded hot water system in Shanghai – nay, in China. You see, most apartment buildings, hell, even small apartments are equipped with a small water heater. No fuss, no loss of energy: the thing turns on when you open the hot water faucet, and heats it just right.

But somehow, our apartment building got conned into installing a hot water tank. If only it were an apartment hot water like in North America, that’d be one thing, but nooooo… Instead the entire block has a single hot water tank. What are the advantages? I still have no idea.

So right smack in the middle of November, the apartment building management declared that they would turn on the hot water only at peak periods. Which means that if you wanted to take a shower at 5h30 in the morning, like Helene, well, though luck: all you had was ice-cold water. They eventually relented and turned it on during the day, mostly because the tenants were starting to have murder on their mind.

Fast-forward to June 2006, past a few hot water outages and other assorted chaos (such as having only hot water – even in the toilet!) The frickin’ hot water tank breaks down without a garantee. The management wants to fix it, but faced with skyrocketing costs, they decide to bill the landlords.

I have only a sketchy idea of what follows, because all I have as evidence is signs written in Chinese. But what I know is this: there’s been 3 meetings between the building management and landlords so far. The first two resulted in the typical Shanghainese shouting match. The last one was mediated by a Government official.

In the meantime, signs discussing the hot water problem multiply. (I have no idea what they say, but I see the characters for hot water – 热水 – everywhere.) Still, there’s no resolution in sight.

Yesterday, things actually devolved to the point that the landlords held a… protest! They gathered in the courtyard, wrote some graffiti on the pavement, and made a fuss. The police was called in to monitor the proceedings while a man screamed in a megaphone. Yeah, you read that right. I actually witnessed my second protest – first one being the anti-Japan rallies – of my whole stay in Shanghai.

What about us, you ask? Well, remember I mentioned these small gas burners for hot water that all apartments except ours now have? Well, our landlady installed one in our apartment – Just as a temporary measure until they fix the tank, she tells us.

Well, I turned off the hot water pipe from the building, and we now use exclusively the burner. Hot water on demand, at last… But that’s probably too easy a solution for the landlords… And so they keep protesting while we take our showers piping hot every morning.