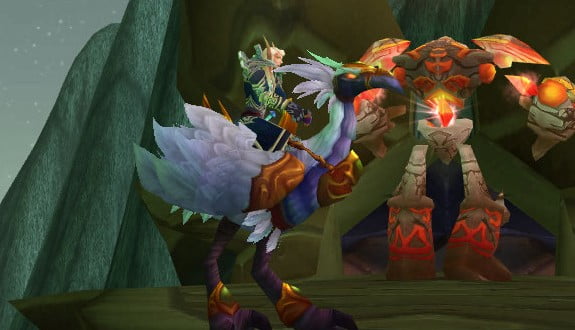 I love you, WoW, but I need to play other games

If you’ve been following my blog, or have had any insight at all into my personal life, you know I’ve been a WoW nerd for the past year and a half. I’ve accomplished quite a few things in that time: leveled two characters to 70, been elected a Guild Master (not that there’s any glory in that, trust me), and went from wiping on Attumen in Karazhan to one-shotting Hex Lord Malacrass in Zul’Aman. I even set up a pretty cool website for my guild, Elitist Jerks.

For my friends and especially for Helene, I’ve been going at it pretty hardcore. For one thing, it took a huge chunk out of my videogaming habit. To put it simply, I just stopped playing any videogame except WoW for a very long time.

But by WoW standards, my gaming habits are described as “casual hardcore”. Sounds crazy, right? The key distinction is this: when you go hardcore on WoW, you start scheduling 3+ evenings in your week to raiding in WoW. If you look at the raiding guilds that manage world-first kills of end-game bosses, these are guys who go at it for 30+ hours/week until they achieve their goals. This game is no mere videogame: if you want to see it through, it demands dedication. It demands monogamy.

In other words, there’s a wall between “casual” and “hardcore” in WoW, and I’ve just hit it.

I’ve raided the 10-man content with my guild. We haven’t downed Zul’Jin, but we’ve seen him. 10-man raids demand dedication, but nowhere near as much as the 25-man content you have to go through if you want to see end-content bosses, such as Illidan or Kil’Jaeden.

And so I’ve been faced with two options:

I’ve decided to go with option 2.

And just like that, some semblance of balance has returned to my life. I still play WoW a bit, but it’s more of a time-waster on long afternoons, than a real hobby right now. I’ve looked at the Wall of Hardcore standing in front of me, and decided the price to pay to cross it was too high. Who cares if I don’t kill Illidan or don’t visit Tempest Keep? These make sense mostly within the context of WoW, but outside the game they are meaningless achievements.

Does it mean my WoW habit has been kicked to the curb? Possibly. But seeing as the next expansion, Wrath of the Lich King, offers 10-man content until the end-game, there’s a chance the next time around, the game allows me to go through the entire content on a “casual hardcore” rhythm. And it’s entirely possible this makes WoW grow again and eat up my videogaming habits.

In the meantime, though, it’s nice to see the rest of the videogaming world, whether it’s singing songs along with Helene’s mad guitar-playing skillz in Rock Band, finishing the delightful Portal, or trying out Penny Arcade’s On the Rain-Slick Precipice of Darkness.

I guess what I’m really trying to say is:

I love you, WoW, but I need to play other games. I hope you’ll understand.

Tagged with: videogames World of Warcraft

Previous: NO CARRIER
Next: Shake the Hand that Feeds You