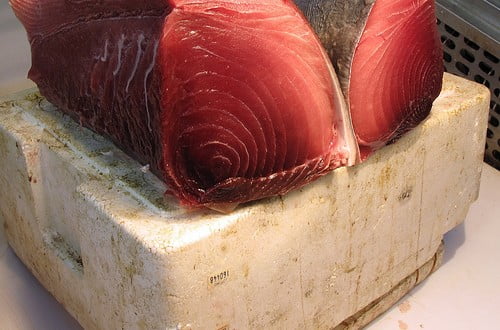 The Empire of Fish

Posted by: Daniel Roy in The Backpack Foodie September 12, 2009 7 Comments

The fishmonger exclaims as he splashes my shoes with brine. Mistaking it for an apology, I wave to let him know it’s alright. His face tells the real story: the splash is accidental, but it’s my fault for being here.

Helene and I don’t belong here. The hordes of motorized carts ferrying fish in styrofoam boxes tipped us off as soon as we dived away from one. We don’t see any tourists this far in; Helene speculates they lack the mental fortitude and the twitch reflexes needed to survive this traffic. But we survived three years of Shanghai streets; you could say we’re used to living on the edge.

Ahead of us, I spy the tuna auction block. We don’t belong here, yet here we are: at the heart of the empire of fish, the Tsukiji Fish Market.

From elven bread to fish

I dreamed of visiting Tokyo’s largest fish market for years. As a matter of fact, Japan’s relationship to fish is the source of my desire to travel.

I first read J.R.R. Tolkien’s Lord of the Rings as a kid, and immediately fell in love with Middle-Earth’s elves. I dreamed for years of visiting Rivendell, to learn their exotic culture and language. I lamented the fact that it would never be.

Years later, I happened upon a very different book, Junichi Saga’s Confessions of a Yakuza: A Life in Japan’s Underworld. I had picked it up from the library to read about tales of Japanese crime syndicates, but it was Saga’s candid description of daily life in pre-WWII Japan that struck a chord with me.

The Japanese fascination with fish, in particular, provoked my imagination. As a Canadian boy who only ate fish as deep-fried sticks, a nation of fish-eaters was stranger than anything Tolkien himself could possibly conjure.

I had found the elves I dreamed of here on Earth, and they ate seafood.

Twenty years later, and I know my way around fish. I haven’t eaten a fish stick in a decade.

Still, Tsukiji comes as a shock.

We’re still inside the Tsukijishijō subway station when our nose gives us all the directions we need. Japanese couples rush past us with portable coolers.

The Japanese, unsurprisingly, eat the most seafood of all the nations of the world. The Tsukiji Fish Market is where most of that seafood is sold wholesale: every day, an astonishing 700,000 metric tons of fish transit through the world’s largest fish market. Stand in the middle of the wholesale area, and look to your left and right: all you’ll see is fish, stretching as far as the eye can see.

As we dodge our way across tiny alleys, hundreds of species of fish start to make my head spin. Tsukiji handles more than four hundred types of seafood, most of which are alien to me. No fantasy novel ever prepared me for this.

Those I do recognize are no less impressive, all of them fresh and shiny as snow after spring rain. It’s 10 AM, so the fishmongers are busy preparing the fresh catch for wholesale customers. A man in a rubber apron prepares live eels in the Japanese manner, by driving a spike through their eye and filleting them in a blur of speed. As I admire his handiwork, I wonder if the eels understand what happened to them before, or after, they are turned into perfect fillets.

All the fish I have ever eaten parade in front of me, from red snapper to oysters, from blood-red shrimp to delicate salmon roe. I spy a man handling fugu, the poisonous pufferfish whose flesh is sought by thrillseekers across Japan.

And then there’s the tuna.

The Tigers of the Sea

Pacific bluefin tuna are the kings of seafood. These large predator fish – some have been known to reach 450 lb – are warm-blooded, feed on smaller fish such as squid, herring and mackerel, and migrate 11,000 miles across the Pacific and back. That tuna looks to us like any other seafood is highly misleading: given its place on the food chain, eating tuna is akin to dining on the flesh of a Bengal tiger.

Despite a dire need to regulate the fishing of bluefin tuna, the species is overfished to the brink of extinction. Still, bluefin tuna is brought in daily to Tsukiji, where it is inspected, evaluated, and auctioned off one by one. The spectacle of tuna auctions has drawn many tourists from around the world, to the point the Japanese government banned visitors from the auction block last Christmas.

Helene and I skipped the auction, but we are privy to the next step in the production chain. The giant fish, their flesh the stunning red of a Burgundy wine, are now cut up into massive chunks, before being sent off to restaurants around Tokyo.

The likeness of bluefin tuna to Bengal tigers comes back to me as I witness the cutting tools required to bring them down to size: the market workers wield knives over a meter long, their blade as sharp as swords. Some of them have been crafted by the very swordmakers who once armed the samurai. One would think even these historical warriors would be amazed at the sight of these blades.

Walking close to huge sections of bluefin is certainly impressive. They are known to command a fortune at the auction: in January of 2009, a single tuna caught off the coast of Japan fetched in excess of $100,000 USD. Knowing that our current fishing practices are pushing the bluefin tuna to extinction, it’s easy to feel both awestruck and alarmed by the display.

The Belly of the Beast

Dazzled by the empire of fish, Helene and I retreat from the wholesale market. Soon, the buzz of motorized cargo dies down.

Circling the wholesale market, the exterior market caters to retail customers looking for fish and other products. The exterior market by itself constitutes an amazing sight: stall after stall offer everything from dried fish to kitchen knives, and a host of restaurants bring the fish from the market to its conclusion on a diner’s plate.

Clothes damped from the wet air, shoes stinking of fish, Helene and I retreat inside one of the dozens of sushi restaurants peppered throughout the exterior market. Here, we indulge in a sinful act: we order o-toro, the fattest part of the bluefin tuna’s belly.

I’ve read too much about the fate of tuna and other sea predators to partake of this lunch without a large dose of ecological guilt. As I write this, I worry that I may be glamorizing the act of eating o-toro. I am ethically more comfortable with eating whale, as most Japanese whale is caught from sustainable stocks, than I am with savoring bluefin.

But how was the o-toro, you ask? Amazing. So fat it melts on your tongue.

To placate my conscience, I order one piece of uni, sea urchin roe. Sea urchin, sitting at the bottom of the food chain, is as removed from tuna as a carrot is from a wolf, and generally comes from sustainable stocks with minimal ecological impact.

It’s delicious, lower on mercury, and easier on the conscience. It’s a small but significant consolation in a world of disappearing seafood.

There and Back Again

We make our way back to the subway, bellies filled with sushi, eyes wide. I think back to the dog-eared copy of The Fellowship of the Ring that I read in the public library as a child.

The Tsukiji Fish Market is the reason I travel. My world might not have orcs or dragons in it, but it has fish of all colors and shapes, from the innocuous sea urchin to the migthy tuna – at least for now.

The fishmongers are wrong: this world is where I belong. And I want no other. 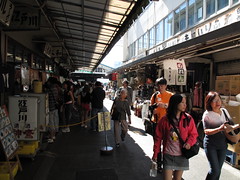 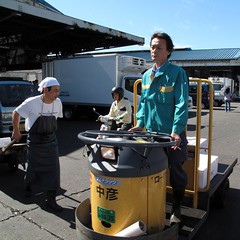 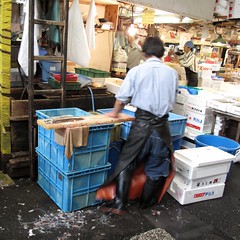 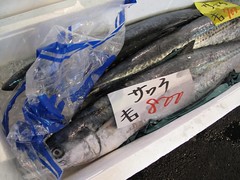 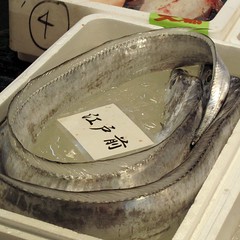 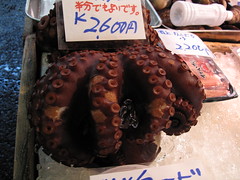 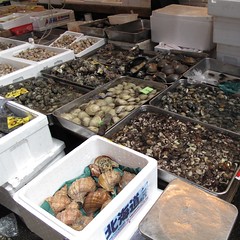 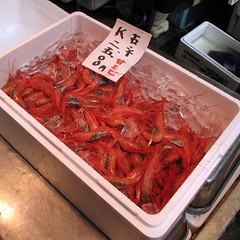 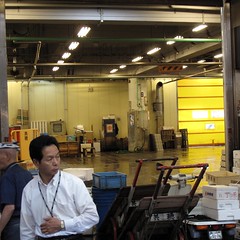 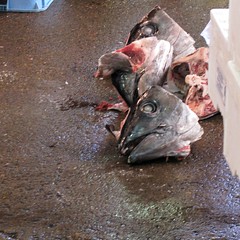 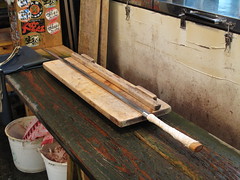 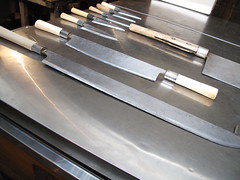 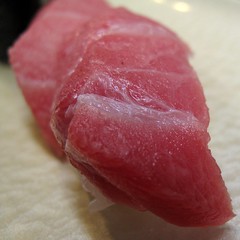 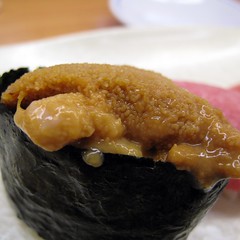 Tsukiji Fish Market, or Tsukiji shijō (築地市場) is located in central Tokyo. The nearest subway station is Tsukijishijō, on the Toei Ōedo Line. From the station, follow the signs… or your nose! If you want to catch the tuna auctions in the morning, you’ll have to arrive at 5 AM sharp, which will most likely involve a taxi ride to get there. If you do catch the tuna auctions, keep to the designated tourist areas.

Keep in mind that the wholesale market is a place of business, not a tourist area. Be respectful of workers, and do your best to stay out of their way.

If you absolutely must try o-toro, keep in mind how much of a precious resource you’re partaking in. Then try uni and see if that does it for you.

Previous: Postcard from the Edge
Next: Lost for Authenticity