I’ve been a vegetarian for a week now, and it’s going pretty well thus far.

Many vegetarians report an increase in energy from the get-go. Did I get an energy boost myself? Well, I think so. Could be psychosomatic, of course, or it could be that the contrast between my Christmas Holidays diet and this one is so drastic that I’d feel this way even with a steak for dinner.

Still, this feels nice. It feels empowering. It feels like I’m in control of my diet, and I’m exploring new territory. Part of the reason I want to go 3 months without meat is that I want to see how this feels once the newness of it is gone; so we’ll see how things feel when I’ve been going 2 months without meat. For now, though, it’s pretty cool.

My biggest difficulty thus far has been to clearly define, and then respect, my own definition of vegetarianism. Initially, I wanted to avoid having eggs, milk and cheese if I didn’t know that they were locally-grown and organic. This is proving to be a tough proposition: I might get a dish I ordered that contains cream, for instance, or agonize over whether they used gelatin in a dessert I might have.

So after reconvening with Helene on the subject, we both decided that although we should try and avoid milk, eggs and cheese from non-small-scale sources, it was better not to agonize over it for the time being. After a month of vegetarianism, we can “crank it up” and see how we handle it. So for now, I try and restrict myself to black coffee, for instance, but I won’t make a case if cream ends up in my dish.

I haven’t felt the need to apologize for being a vegetarian; that is, until I went back to the Farmers Market yesterday. I told Grace, a kind and cheerful Polish woman who sells amazing beef jerky and pepperoni. I didn’t want her to think I didn’t like her products anymore, so I spilled the beans about my experiment. I told her I’d miss her pepperoni.

She patted my hand, a sad expression on her face. “They’ll miss you too!”

Previous: Postcard from a Slaughterhouse
Next: Vegediaries: Day 15 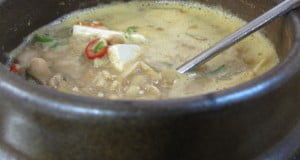 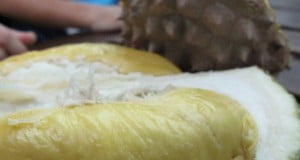