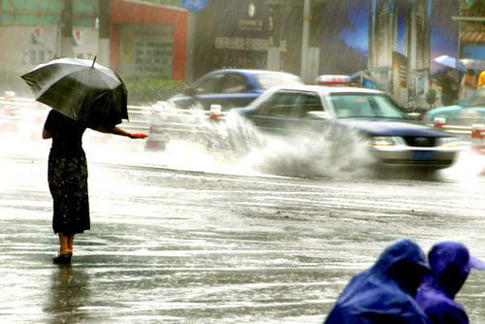 I Wish I Was Exaggerating

After nearly 3 years in Shanghai, there’s a number of things that seemed strange and fantastic at first, to which I have since adapted, to the point that I don’t notice them anymore.

There are, however, some things about Shanghai that still irritate me after all these years. My guess is, if at this point they annoy me, they’ll probably annoy me forever.

Taxis in the rain

Taxis are useful and cheap ($1.25 USD for a short distance), and as such, they’re the transportation of choice for many people in Shanghai. But once in a while, you step outside, and the horror dawns on you: it’s raining. And in Shanghai, that means no taxis. None whatsoever. Nada.

Taxis are cheap enough that when there’s a minor inconvenience to just walking around (whether it’s rain or cold), people just take taxis, which means if you depend on them to get around, you’re screwed. But that’s not all… Oh no.

You see, in Shanghai, the mere difficulty of finding a taxi is enough to destroy all semblance of love for your fellow human beings. Suddenly, people jostle for taxis, play hypocrites as they try to move ahead of others in the street, run to get to a stopping taxi first… It’s Lord of the Flies on the streets of Shanghai, and your only chance of survival is to join the madnes and elbow old ladies in the gut before they catch that precious taxi you and the rest of the mob have been eyeing.

I wish I was exaggerating.

When I first encountered spitting in Shanghai, I found it absolutely disgusting. Then I figured, It’s a cultural barrier, just get over it. Then I tried. And then I tried again. After two years and a half, I have to admit it: I can’t get used to it. I hate it with a passion even now.

It happens everywhere, all the time: an otherwise nice-looking person (old man, young man, heck even a young lady) suddenly feels like they need to clear their throat by violently hawking. For some mysterious reason, the louder you do it, the better: if you can wake up the dead and scare stray cats when you clear your throat, then somebody in authority comes out and hands you a spitting trophy.

Once this is done and all foreigners in a one-mile radius are looking at you in disgust, you should bend over a gutter or a garbage can (trust me – never touch a garbage can in Shanghai) and then, as delicately as you can, spit out your phlegm. You wouldn’t want to disgust anybody by making spitting noises, now, would you?

The spitting is widespread enough that it even takes place at work. A few employees actually clear their throats really loud, and spit in their personal garbage pail. It’s loud enough that it can make me lose my train of thoughts when I’m on the phone, because I worry the guy on the other end will think I’m sharing a cubicle with a pissed-off tiger with bronchitis.

I wish I was exaggerating.