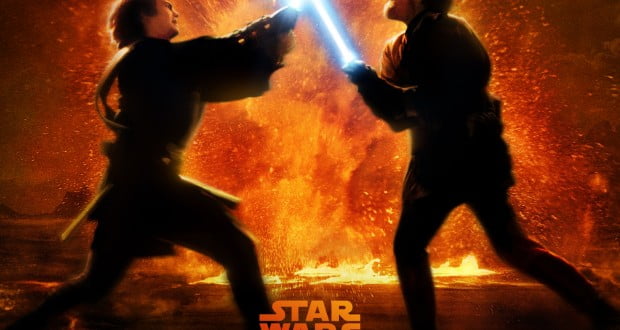 After 25 years, the two Star Wars trilogies are now wrapped up. I remember hoping beyond hope to see the prequel trilogy as a kid, but now that I’ve seen them, all I can think of is, Well, that’s over and done with. My buddy Hugues summed the movie best in this simple sentence: “I was pleasantly disappointed.”

As always, it’s a unique experience to go watch a movie in Shanghainese theaters. The movie was actually part of a double feature, the first movie being a French spy “comedy” called Double Zéros, dubbed in Mandarin(!). I get the distinct impression it would have sucked as much in VOF.

Before we entered the theater, a theater assistant asked us just why foreigners liked Star Wars so much, especially considering the story was so-so and the characters sucked. My colleague David was at a total loss to answer that. I finally explained that we had grown up with the original movies, so have a fondness for everything Star Wars even though we objectively don’t like the new movies all that much. “Ah!” he said. “Just like Monkey King!” Yep, Star Wars is our Monkey King.

Throughout the movie, we had to suffer all the typical elements of a Shanghai theater: since the theater was full (a rare occurrence), the AC could not catch up and we ended up sweating before the credits rolled. There were a few cellphones ringing and people exchanging SMS, as well as the occasional boyfriend explaining the plot to a clueless girl. Although it was the premiere, the print was already quite damaged and the quality was overall bad.

Most annoying, though, was the projectionist. Frankly, I have never seen a worse projectionist in my life. He kept screwing up when he changed reels, so that we always lost 2-3 seconds of dialog. Most annoying was a cut which happened right in the middle of Darth Vader being reconstructed. In another occurrence, the movie ‘rewinded’ for 5 seconds.

With DVD-9’s at $1.50 CAN each, it’s no wonder theaters are a small business in China! Note to companies trying to curtail piracy: start by giving us good theaters!