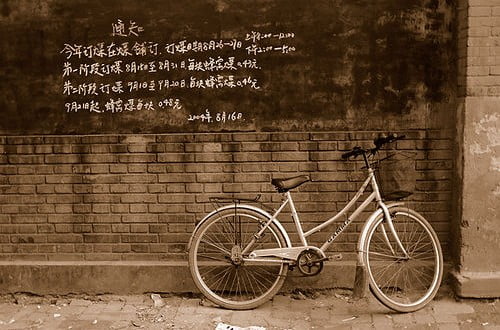 A funny anecdote that happened to me in Beijing over the weekend:

As you may or may not know, it’s an annoying habit of Chinese people all over the country to yell ‘Hello!’ at foreigners. It’s usually the only English word they know, and the reactions it provokes in old-timers range from mild irritant to rage-inducing annoyance. You might not think much of it when explained like this, but imagine it repeated to you every day of your life for a year and a half, and you might begin to understand. It doesn’t help that most of the time, it’s said in the tone of a kid saying ‘Mooooo!’ to a cow, to see if the cow will moo back.

In the hutong in Beijing, the locals are less used to foreigners than in (relatively) cosmopolitan Shanghai. Ergo, I get a fair share of hellos. The funniest ‘helloing’ I’ve seen in a while happened on Saturday afternoon.

As I was walking down the hutong, a guy right in front of me went from impassivity to a very cheerful, very loud ‘HELLO!’ As he said it, he extended his left hand in a friendly wave… And almost smacked a woman riding a bicycle and trying to pass him from his left.

The woman, nearly beheaded by an involuntary clothesline, threw a string of curses at him, while I snickered my way past.

I hope this keeps up, and the Government ends up posting warnings all over the country:

“Good citizens refrain from saying ‘hello’ to our distinguished foreigner guests. Not only does it annoy our foreign friends to no end, but it is a hazard to your fellow men.”