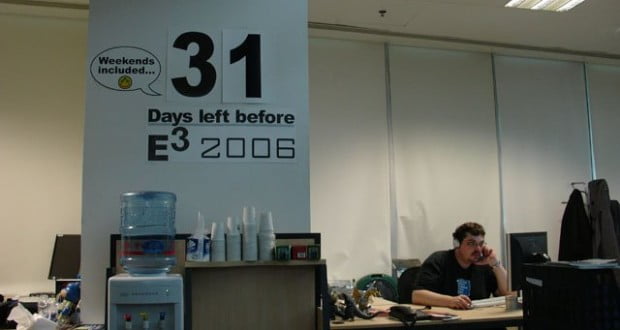 We’ve been in single digits for a little while, on the E3 team. The countdown officially ends Friday, at which point we enter what is called in sports ‘overtime’. (Trust me, actual work overtime has been initiated for a while now.)

Remember that Miracle Build from last week? Predictably enough, all the following builds have been hell. We ended up staying past midnight for a few nights more, to the point that we were pretty much brain-dead for the following 3 days.

But the good news is, we made it. We sent a good version to the press, as well as Microsoft. We received glowing reviews from Ubisoft’s Editorial, and the feedback we received from Ubisoft’s press event has been stellar. Yet we don’t have time to fully rest on our laurels, as all these reviews are coming with some major “buts” attached: simply, we have some critical issues still to solve before we can call it ready for E3.

So we’re entering the very difficult period where we know we’re close to success, we’re near exhaustion, but we can’t give up just yet. Energy is starting to wane, if I can judge by the number of people who fall sick for a day throughout the remaining weeks.

Now is the time to clench our teeth, push through the stress, and turn this potential of gold into gold.

Then all that’s left is to wow the rest of the industry at E3.

2006-04-26
+Daniel Roy
Previous: The Miracle Build
Next: The Euphoria of Completion